DVD For Sale “The Sweet History of California Strawberries” 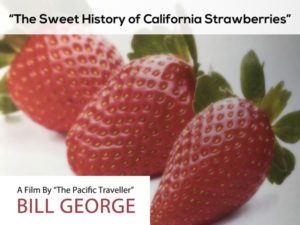 For more than 100 years, California strawberries have set the standard for the world. How did this happen? This film takes you to the lush fields along the coast and tells the story of the families who have created this successful industry.
They have overcome the challenges of depressions, wars, infestations. global competition and urban sprawl. Many have risen from working in the fields to owning their own prosperous farms today. Get the inside story on how this great fruit gets to your table.

DVD For Sale “Sacramento and the Transcontinental Railroad”

Join historian and filmmaker Bill George as he follows in the footsteps of the great people who defied the odds and led the way in the greatest achievement of the 19th Century, the Transcontinental Railroad. Connecting America by rail was long a dream of American leaders. But the very thought of scaling mountains, crossing deserts and thousands of miles seemed like madness to many. Abraham Lincoln, Theodore Judah, Leland Stanford and Chinese workers joined together to build what no one else had ever done-“Nothing Like it in the World.”

DVD For Sale “Beyond a Miracle, Creating California’s Empire of Agriculture”

Beyond a Miracle, Creating California’s Empire of Agriculture tells the dynamic story of the agricultural pioneers who shaped the state’s farm heritage. Battling the weather, isolation and destructive mining, California agriculture rose to become a world leader in diversity and quality food for the nation.  This historical documentary film takes you to the mountains, rivers and valleys where farmers struggled to plant and harvest crops. You will see how they survived droughts, floods and disasters to set the world standard for agricultural production. Learn about the father of California agriculture and how his vision and actions developed our modern farm economy.

“A much-needed explanation of the human and natural forces that created the greatest agricultural sector in world history”- Gary Kurutz, California State Library 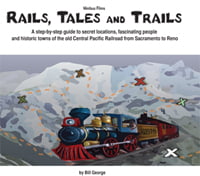 This book is a step-by-step guide to the secret locations, fascinating people, and historic towns of the old Central Pacific Railroad from Sacramento to Donner Summit.  The book shows you how to drive and walk to the sites and understand the story of how the railroad was constructed. You will go from sea level to more than seven thousand feet in elevation and view some of the most stunning scenery in North America.

This is the first time this information has been put together in one book.  This is a combination travel guide and history and explores many of the myths about the railroad and the people who built it.

Find out the real story of the Chinese workers, the “Big Four” and the truth about the legend of Cape Horn.

This book can be read alone, or enjoyed after watching our documentary film, the Hidden Wonder of the World, which shows the incredible tunnels, trestles and mountains crossed by the railroad.

“The book is a marvelous travelogue that masterfully combines the story of building the railroad and shows you how to enjoy this majestic sites today. There are even tips on where to eat along the route.”  Walt Gray, television journalist and historian.

Through hard work, determination and knowledge, the Chinese made an incredible and lasting mark on California. Chinese Builders of Gold Mountain takes viewers to the places where the Chinese built levees, temples, stores and railroads. Gold Mountain is the name the Chinese gave California during the Gold Rush days.

The film traces the path of Chinese immigrants who came to California in the 1850s. The documentary was filmed in Sacramento, Auburn, Marysville, Locke, Fiddletown, Oroville, Monterey and Donner Summit.
It takes viewers to places where the Chinese lived and worked. In the Sierra Nevada, viewers will see the tunnels the Chinese blasted through solid granite to help build the transcontinental railroad through the mountains. The documentary shows how Chinese built the levees in the San Francisco Bay Delta that reclaimed thousands of acres for farming.
The film explores Fiddletown in Amador County to visit the largest collection of Gold Rush-era Chinese buildings.

Marysville and Oroville were two of the most important towns for Chinese in the 1850s and 1860s. Today, the Bok Kai Temple in Marysville is still operated by the local community, and gives rare insight into the lives of the Chinese who lived and worshipped during the height of the Gold Rush. In Oroville, the documentary visits the Chinese Temple and Museum Complex, revealing rare artifacts and amazing artwork. The film explores cultural, legal and political issues, as well as tensions between the Chinese and Anglo communities.

“DVD For Sale “Newcastle, Gem of the Foothills”

Newcastle, Gem of the Foothills, is a compelling documentary that looks at the growth and development of one of California’s most compelling Gold Rush towns. Located in the foothills above Sacramento, Newcastle today is a pleasant community featuring many impressive homes on tree-lined streets. Founded in the throes of the Gold Rush, Newcastle became an important stop on the original transcontinental railroad. Benefiting from a Mediterranean climate and lush soil, Newcastle became a center of the nation’s fruit industry, shipping its golden produce to Chicago, New York and other points throughout the nation. Native Americans, Gold miners, Chinese shop keepers and Japanese farmers all played an important role in Newcastle’s history, and this film takes an unflinching, often emotional look at both the good and the bad times in the last 150 years. Told through the eyes of those that experienced life in this quintessential small American town, Newcastle, Gem of the Foothills reveals the honest and enduring ways of a town that directly experienced some of the greatest events in U.S. History.

The Hidden Wonder of the World, the Transcontinental Railroad from Sacramento to Donner Summit 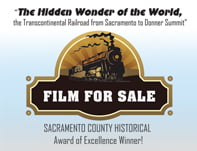 For the first time the hidden wonders of one of America’s greatest construction and engineering feats are revealed on camera. The film visits the abandoned granite tunnels, stunning trestles, gigantic cuts and breathtaking scenery traversed by the Transcontinental Railroad as it rose from Sacramento over the Sierra Nevada. Portraits of the picturesque towns and interviews with historians round out this incredible film. People come from all over the world to see these hidden sites. Now you can travel to the summit of the Sierra Nevada and marvel at how the master engineers and builders of the 1860s accomplished this heroic deed. The film won the American Society of Civil Engineers Award for best communications project and the Award for Merit from the Sacramento County Historical Society.

“Bill George brings history to life in this amazing film that explains how one of America’s greatest construction and engineering feats was accomplished,” Kevin Starr, author and California State Librarian.