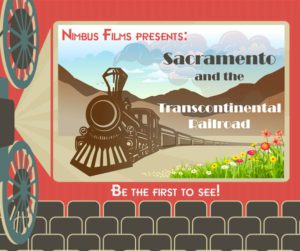 A special film marking the 150th anniversary of the completion of the Transcontinental Railroad.

The amazing story of how Sacramento astonished the world and created the world’s greatest railroad.

Join historian and filmmaker Bill George as he follows in the footsteps of the great people who defied the odds and led the way in the greatest achievement of the 19th Century, the Transcontinental Railroad. Connecting America by rail was long a dream of American leaders. But the very thought of scaling mountains, crossing deserts and thousands of miles seemed like madness to many. Abraham Lincoln, Theodore Judah, Leland Stanford and Chinese workers joined together to build what no one else had ever done-“Nothing Like it in the World.”

The film will take you to the original construction sites, and explain the cultural, political and economic changes the transcontinental railroad wrought. It is no exaggeration that the railroad changed America and world commerce forever.

Featured in the April-May edition of Sactown Magazine

April 6 and April 11, Bill interviewed on the Mark Haney Show,