Local historian Bill George takes us on an express train to 19th century Sacramento via his new documentary about the Transcontinental Railroad. He talks to Sactown about our city’s pivotal role in helping Americans realized the California dream.
So for those of us who don’t remember from grade school, why was the Transcontinental Road such a big deal? 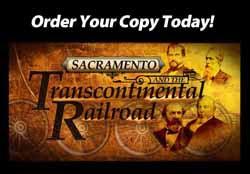 It changed everything. California was really remote. You typically had to get here by sea or on foot, and it was a long hard journey. The [rail line] was completed in 1869, and suddenly, instead of taking up to 6 months to get here [from the East], you could get here in about a week. So it helped populate the state. The tourism industry also developed – Sunset magazine was developed by a railroad [company] to interest tourists. Of course, California’s agricultural industry was probably the greatest beneficiary. In the East, you couldn’t get fresh fruits and vegetables in the winter. Within a few years, California was the No. 1 agricultural market in the country.

How did it all get started?
Abraham Lincoln was elected in 1860, and he was a railroad attorney, so he was very familiar with railroads.
And Lincoln and his advisors wanted to link the nation by rail. The [original] Pacific Railway Act was passed in 1862, and it designated the Central Pacific Railroad as the winner in a competition to build the railroad across the country, starting in Sacramento. There were four guys [here] who invested: Leland Stanford, Collis Potter Huntington, Charles Crocker and Mark Hopkins – “The Big Four” They worked with Theodore Judah, a great engineer, to go up into the mountains and do surveys, and off they went. Sacramento wasn’t the only city that wanted it, though.
No. Other cities were very upset about it. San Francisco wanted it. When the Pacific Railway Act bill came out, it said it had to be built to the Pacific Ocean – or the nearest navigable river. Of course, that was the Sacrament River. When people in San Francisco saw that, they went crazy, called Sacramento all kinds of names – a bunch of crooks and sharpies. They said “Those same rascals who stole the capital got the Transcontinental Railroad. Will nothing stop them?!” They were real rivals in those days. The guys in Sacramento, they had some sharp elbows, and they were determined to get this thing.
Your forthcoming documentary, How Sacramento Built the Transcontinental Railroad, will debut in May. What made you want to make this film?
I’m really trying to get the point across that it all got started here. You read a lot of books that call Sacramento the terminus, which usually means the end, but it wasn’t the end – It was the beginning. That gets lost. People told [The Big Four] that they were crazy, but they plotted and somehow got the money to do it, and they did it ahead of schedule. Without our ancestors, without the people in this city at the time, it just wouldn’t have happened. That’s what I’m trying to scream from the mountaintops.
The Sacramento Historical Society will host a screening of Bill George’s new film on May 28. ($5: 7 p.m. at the Knights of Columbus hall, 5961 Newman Court) For more info, call 530-218-5438 or visit sachistoricalsociety.org.