The Author, On ‘Grapes Of Wrath’ 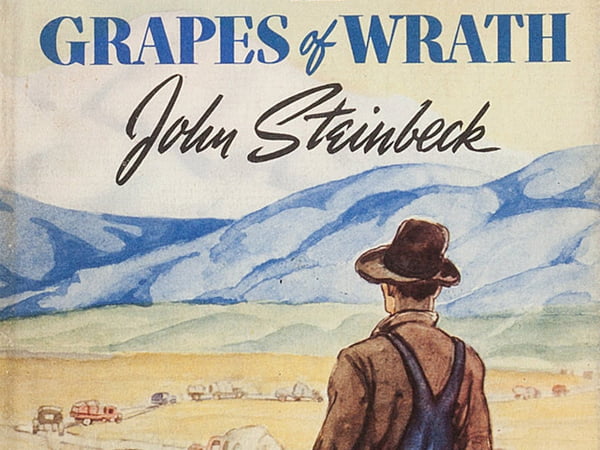 This is one of my favorite essays on writing. I though I would share it on my blog, it’s great advice for all writers!

In 1953, as a student at Columbia, I wrote a paper on the ”Grapes of Wrath” for a literature course. Although I knew John Steinbeck only through his novels and stories, I mailed the critique to him. To my surprise and delight, I received a letter from him by return post. It was handwritten (so was the 200,000-word ”Grapes of Wrath” manuscript) on a yellow tablet. It came unedited and contains misspelling and relaxed grammar and punctuation.

I have your letter and critique for which I thank you. It is a patient and an honest job.

I think it would be unnatural if I were not pleased. So many literary conventions have grown up in the last fifty years. The process of acceptance-rejection is not unlike the lone dance of the fiddler crab. A man writes a book -why? – Because he wants to. His impulse is probably the same one that makes him sing or try to go to bed with all beautiful ladies. Its a kind of outpouring. And there’s his book – somehow naked and cold standing up while the well clothed mock at it. Usually they are angry with it before they start. Now the purpose of a book I suppose is to amuse, interest, instruct but its warmer purpose is just to associate with the reader. You use symbols he can understand so that the two of you can be together. The circle is not closed until the trinity is present – the writer, the book, and the reader. And this works with everyone but critics (all under graduates are critics). Critics dare you to be ”great.” But this is all after the fact. You didn’t want to be great. You just wanted to write a book and have people read it. I have had some very strange criticism.

Let’s take the inner chapters of the Grapes of Wrath. They have been pommelled. You are the first critical person who seems to have suspected that they had a purpose. The reader in general accepted them for what they were. A writer who spends that much time on a book usually knows what he is doing and why. Critics refuse to believe this.

You say the inner chapters were counterpoint and so they were – that they were pace changers and they were that too but the basic purpose was to hit the reader below the belt. With the rhythms and symbols of poetry one can get into a reader – open him up and while he is open introduce – things on a intellectual level which he would not or could not receive unless he were opened up. It is a psychological trick if you wish but all techniques of writing are psychological tricks. Perspective in painting is a trick, word sounds are tricks, even arrangement and form are tricks. And a trick is only good if it is effective. The writer never knows whether his trick is going to work until he has a reader. Since the Grapes of Wrath seems to have had an impact on a large number of readers I must believe that the tricks worked. My last book East of Eden makes use of a whole series of different tricks. As usual the critics have rejected but the readers seem to be absorbing.

It has become a convention, probably a good one -never to answer or explain. Poor old Leo Tolstoy used to spend all his time answering critics – when his answers were inherent in his work.

The cultist seem to have a curious view of writing. They see a writer fumbling up the steps of immortality. There is a very curious ego maniac attitude. Most good writers I know have no time for immortality. The concentration required to write the book at all, knocks such considerations out. Besides the pure horror of the job – the fantastic problems of language and form and content make the writer humble. No one has to make him humble. And there is a further thing which I think has never been mentioned about criticism. The process of writing a book is the process of outgrowing it. Disciplinary criticism comes too late. You aren’t going to write that one again anyway. When you start another – the horizons have receded and you are just as cold and frightened as you were with the first one.

Another thing has not been said about critics -they are professionals interested in their own careers. The book they criticize is the material for their own successes or failures and it is of secondary importance to them. I know critics who, thinking up a wise crack – wait happily for a book to come along to apply it to. This is creativeness – not criticism.

I don’t think I am ill tempered about adverse criticism. It does seem kind of meaningless. But, do you know, you never get over the ability to have your feelings hurt by deliberately cruel and destructive attacks. Even if you know why the attack was made, it still hurts.

I have run on at this length, I suppose, because I liked getting your letter and the piece about G.O.W. Thank you for sending it.