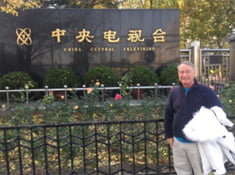 He discussed his career in filmmaking and his historical documentary films.  Of special interest was his documentary, Chinese Builders of Gold Mountain, which explored the Chinese experience in 1850s California. His film explored the Chinese contribution to the Gold Rush, building the transcontinental railroad and helping create California agriculture, and told the story of the early Chinese fight for civil rights.

Bill on the Great Wall, outside of Beijing 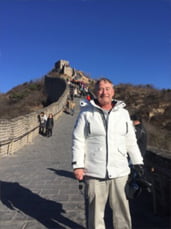 Representatives of China Central Television provided cultural and historical insights, and took Bill to the Great Wall and the Forbidden City. The connection between building the transcontinental railroad over the Sierra Nevada and the building of the Great Wall are fascinating. The construction boss of the railroad, James Strobridge, did not believe the Chinese had the necessary skills to build the wall. However one of the Central Pacific Railroad owners, Charles Crocker, thought otherwise. “They built the Great Wall of China, didn’t they?” he asked. The Chinese were brought onto the job, and quickly proved their worth, building the railroad over Donner Summit in just five years. Touring the Wall, which is massive and climbs the crest of hills in a winding way similar to a rail bed was an evocative experience.

Bill at the beautiful garden in the Forbidden City 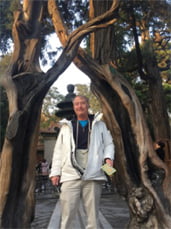 The trip has led to a collaboration between Bill and China Central Television to create segments about California History for China Central Television. It was a wonderful experience, leading to greater understanding of the tremendous forces at work in Both China and California during the Gold Rush era. This relationship will continue to grow, and facilitate cross-cultural exchanges centered around Chines and California history. 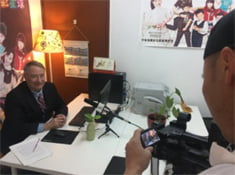